Presentation of the village and the existing building (Panel 1)

The presentation shows the village of Long Ba, on the side of the mountain the hamlet is composed of about twenty houses surrounded by rice fields and other food crops. In the center of the village is the ruin of a family temple. The temple is built according to the pattern of a house on Chinese courts. Only the walls, made of terra-cotta blocs have stood up with time. A series of bases of stone columns, some finely worked, show the location of the wooden structure that once supported the roof. Part of it is still present and will allow the pathological analysis for a reconstitution.

Vision at the scale of the territory (Panel 2)

In preparation for a reconstruction of the Long Ba Family Temple, we envision a system that aims to bring financial support to the territory through sustainable tourism. The goal of the project is to create a hiking trail in the whole valley. The departure of it would take place in the city of Houxi, by fluvial or pedestrian access, and creating a loop connecting the various villages of the valley. The use of means of transportation such as horse riding, canoeing or simply walking will limit the tourist affluence and thus preserve the valley. Hikers, aware of the ecological and cultural issues of the Youyang county could participate in various activities throughout their stay. Each village will offer activities related to the Tuja and Miao cultures, such as traditional dance classes, introductions to local handcrafts, and sales of products made on site. The villagers will invite tourists to discover the traditional cuisine of the region. The accommodation can be done in several ways, depending on the availability of villagers to receive tourists in their homes, hostels can also be established in unused buildings. Finally the possibility of camping on site may be considered. The last proposal of the project is to invite visitors to volunteer and carry out a construction internship in order to restore the buildings in ruins on the territory in a traditional way. This will entail a deep involvement in the culture of the region and its inhabitants as well as a limitation of the costs related to the reconstruction.

In order to restore the Long Ba Village Family Temple, we propose a sustainable strategy to encourage traditional methods of construction. The idea is to promote short circuits by using the materials available on site. The main materials of the temple are wood and terracotta. To do this, a series of temporary workshops will be arranged in the village: a sawmill in the north near the forest and a brickyard in the south that will use the clay deposits of the region. A stable will be placed next to the temple to use horses as a mean of
transportation for materials. The sawmill could also be used as a carpentry shop to make the pieces of the temple structure. In addition, workers will replant trees to avoid deforestation. Bricks and tiles made in the village can be used in other constructions of the valley.

The temple now in ruins, requires restoration to be used as a gathering place for the village. It will allow the villagers to meet and will become the center of the hamlet again. The building will be used for multi purposes and will therfore accommodate a possible school class for children in the village. Finally guest rooms will be made available to host visitors for the night, bringing an income to the village and participating in the territorial strategy.

The restoration project of the temple is carried out in four phases:

1. Pathological analysis: the temple currently in ruins has scars that permit to understand its composition. The breakdowns of the carpentry have left holes in the West wall and show the heights of the roofs. A basic series of stone columns testify the presence of wooden columns now missing. These were attached to the walls by means of rafters still present in the walls.

2. After analyzing the existing frame, a structure proposal will be done. Like the typical Chinese house on courtyard, the temple is composed of four rooms. The first one at the front is for the rooms for the guests, the two small on the sides are the servant rooms, for the kitchens and the toilets. The back room is the main room and is intended to accommodate villagers as well as travelers. The central courtyard is used to harvest and drain the rainwater.

3. Restoration proposal: The rooms are closed in a traditional way thanks to wooden panels set between the columns. The circulation is carried out from the outside, it is covered to protect users from rainwater. A room is reserved for sanitary, they are multifunctionnal and can be used as showers and as toilets to maximize the size of the building. The building is not isolated and won’t be adapted to receive the public. However, it respects the traditional constructive way of building.

4. Proposal for rehabilitation: close to the previous proposal, the rooms would be isolated here by means of partitions inserted between the structures. These remain apparent and illustrate the structure that existed. In this way the building offers warmer heated spaces to the inhabitants of the village. The last panel shows exterior and interior views of the rehabilitated temple, providing an idea of the atmosphere that migh t be generated. 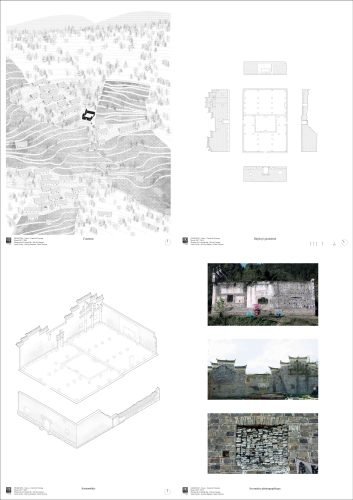 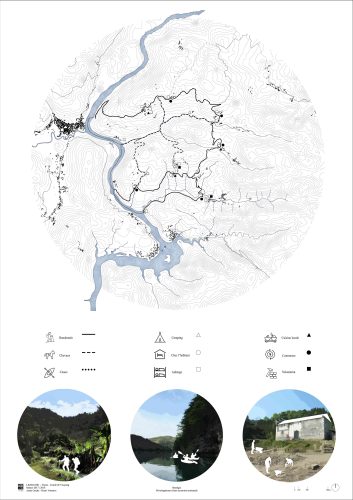 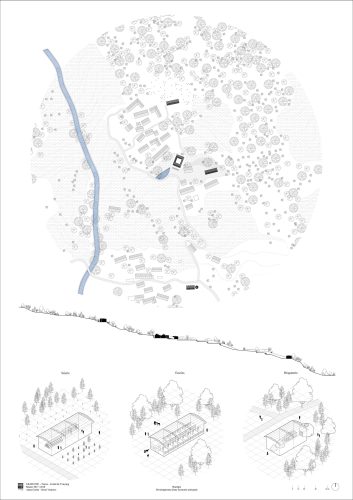 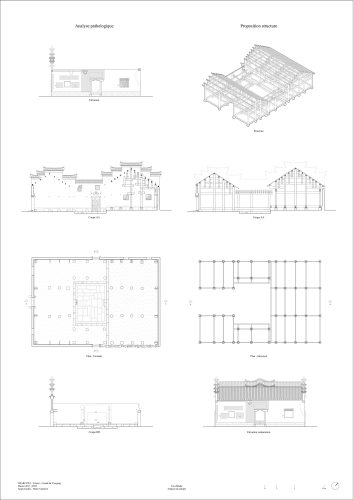 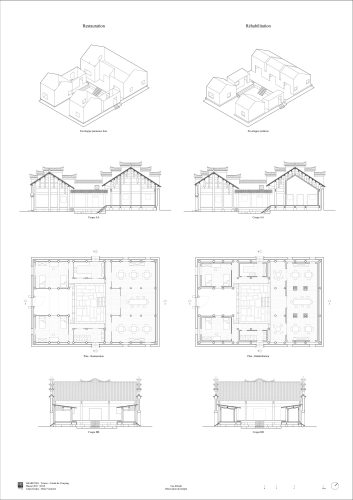 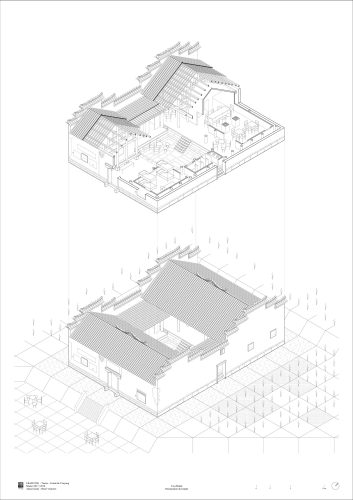 Work done with the supervision of LOCI’s teaching staff for the Youyang-lab: