The proposal aims to take the best out of the ancestral cultural way of living in Kong Hu Xi and the contemporary one to lead to a projected scenario. The vision of this first group of students aims to counter the rural exodus of the village by finding a new ecological, economical, social and cultural balance within Kong Hu Xi.

The ancestral dwelling consists of a house with a tri-generational family. The house operates with its pigsty, its portion of fields, and in its immediate vicinity, it also works with a small vegetable garden, and a source for water supply. The inhabitants have still good carpenters and build their own houses in timber frame. The rice fields are grown on a rice-duck and rice-fish system, ducks and fishs being used to eat the insects that eat the rice plans. The pigs are fed with the wastes of human food which is sufficient since the village is well populated. The concept of waste does not exist. Both human and animal excrement, both collected in the hog barns, are used as fertilizer for the fields. In terms of economy, the only effective way of transportation is by foot and the river. But the river system is declining in favour of the road infrastructure. In terms of culture, a typical Tujia dance is practiced during important events. We will also highlight the craftsmanship of the village and the ability to make lanterns in paper or silk. The inhabitants also build wooden boats called Sampan.

In the current situation, the big factor of change is the appearance of the metropolitan area. This absorbs a significant amount of workers. The city has brought the dream of better comfort as well as the consommation of new products that are disruptive elements in the ecosystem set up. Ducks and fish are replaced by pesticides that prove to be less productive than the ancestral system, they pollute the soil and water and cost money. In addition, the human food source induced by ducks and fish has disappeared.

At present the houses are mono or bi generational. Either the old and the young, or just the old ones. The use of the fields is therefore reduced. The houses in the village are almost empty. Because of the presence of fewer people, the pigsty houses only hold one pig, since smaller families have not enough waste to feed several. The pig being a social animal, it is miserable if it is left alone and therefore less productive.

In the projected situation, we would like to return to some elements of the ancestral system that work well while adapting it to certain aspects of modernity. The idea is to find a suitable contemporary input in the village. We want to find a double balance: the balance within the village and the balance with the city and its stakes. To this end, several notions are put in place: the return to rice-duck and rice-fish agriculture, the revitalization of the craftsmanship, the plantation of new types, the grouping of piggery, the grouping of the sources allowing a better control of the water as well as the contribution of modern comfort techniques.

The project strategy consists of a phasing that incorporates intervention proposals in a temporal order. The organization of the different phases and their contents is done taking into account the ease of feasibility, the need of the inhabitants and the necessary budget. In the table of the second panel, the abscissa represents the temporality, with at the top the most recent and at the bottom the farthest project in time. The ordinate takes up the intervention proposals and their spatiality in scale, the territory, the village and the building.

The first phase is called Sanitation and Planting. The sanitation part consists of stopping pesticides and artificial fertilizers to return to an ancestral ecological system such as the use of ducks and fishs to eradicate insects that prevent the good development of agriculture. The plantation scenario consists of planting different tree species in order to mitigate the erosion of the mountains on the one hand and develop the products offered by these different trees on the other hand. Mountain villages receive subsidies from the Chinese state by planting trees that reduce erosion.

The second phase is called distribution and development. The distribution part consists of placing water reservoirs upstream of the villages and at the places of the most important springs. This is to provide residents with safe, easy-access to water. The tank is upstream of the houses, the water comes under pressure. The development part consists in highlighting craftsmanship skills by setting up a workshop.

The third phase is called regrouping and transformation. The regrouping part consists in grouping all the villages of the Kong Hu Xi Valley by the creation of a carpentry workshop at the intersection between the Youshui river and the main road of the valley. Its strategic position allows to be accessible by all the villages of the valley and to be opened to other valleys by the navigable river. The processing part consists of grouping the pigs in several larger hog barns. This is to prevent a pig from being alone in a pigsty. The fact of emptying some pigstyhouses gives the possibility of reinvesting them with toilets or storage spaces.

The fourth phase is called equipments. First, this phase consists of enlarging the carpentry workshop by integrating other activities that can link the valley such as a boat landing, a dispensary, a community center for the village, etc. Secondly, this phase proposes the incorporation of sanitary equipments like a communal laundry in the village and showers in the houses. Such equipment requires a piping system to bring clean water and evacuate dirty water. This system can be placed under the paths. The dirty water is piped to the outside of the village where a phytopurification system with three basins purifies the water before returning it to the river.

The fifth phase is called autonomy. This phase is the result of the previous phases and allows a greater autonomy of the village from the city. This makes it possible to the inhabitants to telework from the village.At this stage, thanks to people returning to live in the valley, agricultural production has increased from 70% of agricultural terraces abandoned to 30%. In addition, this phase suggests to integrate into the houses volumes some thermally insulated rooms.

On the panel outlooking the territory scale, the valley of Kong Hu Xi and its surroundings are represented . In the lower left corner of the panel is Houxi town. The important watercourse that crosses the map is the Youshui Navigable River. The Kong Hu Xi Valley is enhanced by a more precise design of vegetation and project interventions. In general, what is represented in black and gray corresponds to the existing and what is represented in orange are the interventions.

Work done by students from LOCI :

With the supervision of LOCI’s teaching staff for the Youyang-lab: 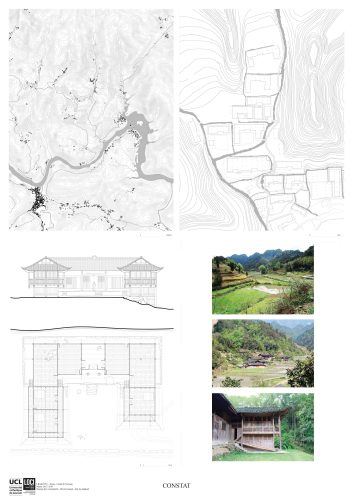 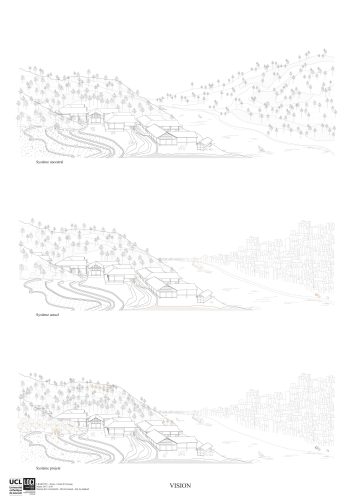 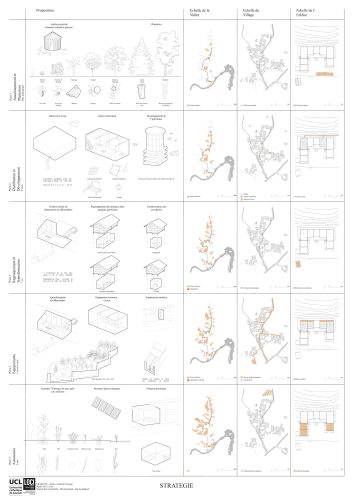 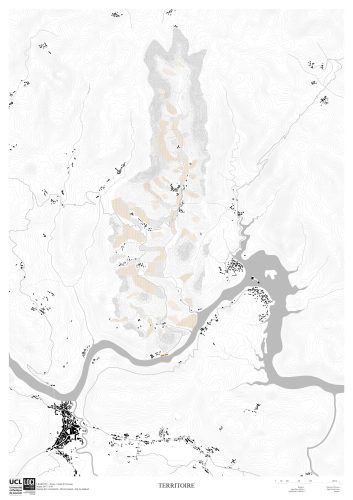 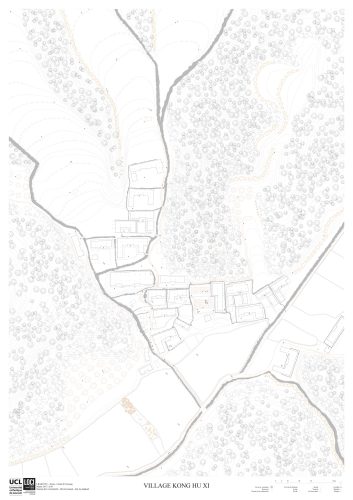 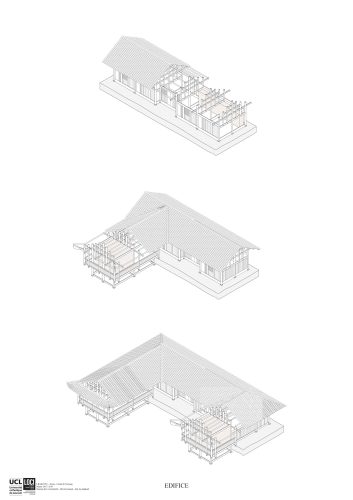